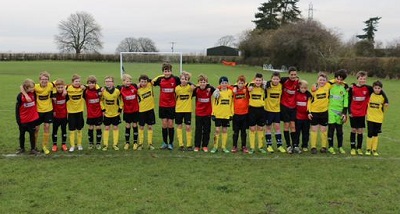 1 Team size should be 9 v 9 The playing area should be 80 yds X 50 yds . Maximum squad size of 18 per Team. A match may not start if one Team has fewer than 6 players.
2 The Penalty area extends 13 yds from the goal line and 32 yards across the width of the playing area. The penalty spot should be 8 yds from the goal line. The penalty area should either be line marked or coned.
3 The goal size should be minimum 16ft maximum 21 ft between the posts and 7ft from the lower edge of the crossbar to the ground. The Coca-Cola Big Red Bag and Samba goals are suitable. Please note in view of a number of accidents that have occurred it is necessary to ensure that portable goals are either pinned or weighted to prevent them toppling forward
4 The ball shall be a size 4.
5 Any number of substitutes, without being named may be used at any time with the permission of the Referee. A player who has been replaced may return to the playing area as a substitute for another player All Team players should receive equal playing time where possible, with a best practice recommendation of at least 50% per player for each game.
6 Players are required to wear shin-guards at all times goalkeepers shall wear a distinguishing playing top.
7 A Referee should be allocated to every match. It is his decision as to whether he requires Assistant Referees to run the line.
8 Duration of matches should be 30 minutes each way. No player shall play more than 100 minutes per day.
9 The kick off is taken in the centre of the playing area to start the game and after a goal has been scored.
10 The offside rule shall apply. As per the Laws of Association Football
11 Free kicks. As per the Laws of Association Football.
12 Penalty kicks are taken 8yds (7.32m) from opposite the centre of the goal
13 Throw ins should be taken in the normal way. A foul throw should be given another chance after which it shall be awarded to the opponent.
14 The opposition should be at least 10 yds away when a corner or free kick is awarded.
15 Goalkeepers Normal Laws of Association Football shall apply
16 Goal kicks normal Laws of Association Football shall apply.
17 Common sense should prevail at all times.

Except where other wise provided above, the Laws of Association football shall apply.